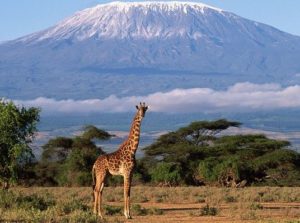 In the Northern areas of Tanzania, beyond the hills rises the mighty Mount Kilimanjaro. The peaks of the mountain are usually covered in snow and it has three volcanic peaks namely Kibo, Mawenzi and Shira. It is the highest mountain in the whole African continent with a height of 5896 m. A true manifestation of glory. Owing to its significance in the region, it has been granted the names of Mountain of Lights, Mountain of Caravans and the Mountain of Greatness. However, the actual meanings of the name of the mountain are still a mystery even to the local population. In traditional folklore, it is a symbol and metaphor for the beauty of Africa.

It is one of the biggest tourist attraction in Tanzania as people from all over the world visit the breathtaking views in Africa and enjoy this miracle of nature. The hike of Mount Kilimanjaro is comparatively easy as compared to other high mountains.

We were traveling through the African Continent and had just spent over a week at Victoria Falls in Zimbabwe and Zambia. We had already planned to visit the highest mountain in Africa and hike to the top of it. Reached here in the month of September in order to experience the snowy peaks as well as the dormant volcanic areas. With booking a hotel close to Mount Kilimanjaro in the Moushi area, our traveling time could be less. We would be fully fresh to start our climb of the mountain.

Hiking to the Crater Rim and Gillman’s Point

We have heard that hiking to the top of the Mount Kilimanjaro is a doable task as compared to any other mountain of this size in the world. Similarly, when you go up the mountain, the views of your surrounding and scenery at large keep getting more and more beautiful. We started our hike on the Marangu Route early in the day. It is the oldest and the most established route here, which is commonly used by most of the hikers. This route approaches the peak of Kilimanjaro from the eastern side and has boarding and lodging facilities along the way. There are dormitory style huts on the way to the top where the hikers can rest for the night.

We continued our hike towards the Uhuru Peak of the mountain for five days before we reached the top of the mountain. We stayed at the Horombo Hut and Kibo Hut on our way to the Uhuru peak. Camped where the huts were not closed at night. The scenes from the top of the peak were breathtaking. Spent quite a few hours taking pictures of nature’s marvel right in front of us. We also enjoyed our dinner at the top of the mountain before we decided to start our descent to the base. It took us at least two days to reach the Marangu Gate where we drove back to our hotel.

It has been a tough week for us as most of the time we were climbing the mountain. We spent a day resting at our hotel before we decided to explore the other beautiful places in Tanzania.